April marks exactly one year when the first Lithuanian electric buses “Dancer” started servicing regular public transport routes in Klaipeda and proved their technical reliability. For the newly manufactured “Dancer” buses, it was a huge challenge and responsibility to serve the routes of “Klaipėdos autobusų parkas“, a public transport operator, that is recognized as the best in Europe in terms of compliance with the route schedule standards.

The total mileage of “Dancer” electric city buses developed and manufactured by the company “Vėjo projektai”, during the last 12 months amounted to more than 120 thousand kilometers. The average length of one route currently served is more than 22 kilometers, and each bus makes between 7 and 13 trips per day, depending on the day of the week and schedule.

“Dancer” buses running in the streets of Klaipėda from the spring of 2020 was not hindered by the extreme weather conditions – the heat of +32 degrees prevailed in June and the cold of -20 degrees, which solidified in January of this year. Under these conditions, the buses served regular public transport routes for 290 kilometers per day without any interruptions.

According to Alvydas Naujėkas, General Director of JSC “Vėjo projektai”, due to its extremely lightweight, the Lithuanian electric bus “Dancer” requires less energy, so, it has smaller than usual batteries, which are recharged in an average of 8 minutes thanks to the unique technology pantograph.

“One of the most powerful 500 kW pantographs on the market ensures extremely fast battery charging, and the “Dancer” bus, which is recharged periodically during drivers’ breaks at the final station, can continuously serve regular routes in Klaipeda. We are proud, that the first buses manufactured by us work in Klaipeda and by serving routes meet the expectations of public transport operator “Klaipėdos autobusų parkas“, which has the highest standards of schedule compliance in Europe. According to last year’s data, we can see that one bus can route more than 300 kilometers a day on the streets of the Lithuanian port city, and if it is necessary to service night routes during the summer season, “Dancer” buses can be operated even around the clock, ”says A. Naujėkas.

The innovative telemetry tracking, and monitoring system used in “Dancer” buses allows to monitor various technical data of the bus, even drivers’ driving characteristics. This system allows “Dancer” service team to monitor bus data on regular routes and to quickly detect discrepancies, which ensures the prevention of bus failures and the constant availability of the bus. Based on data from the last 12 months, the availability of both buses is 95.78%. 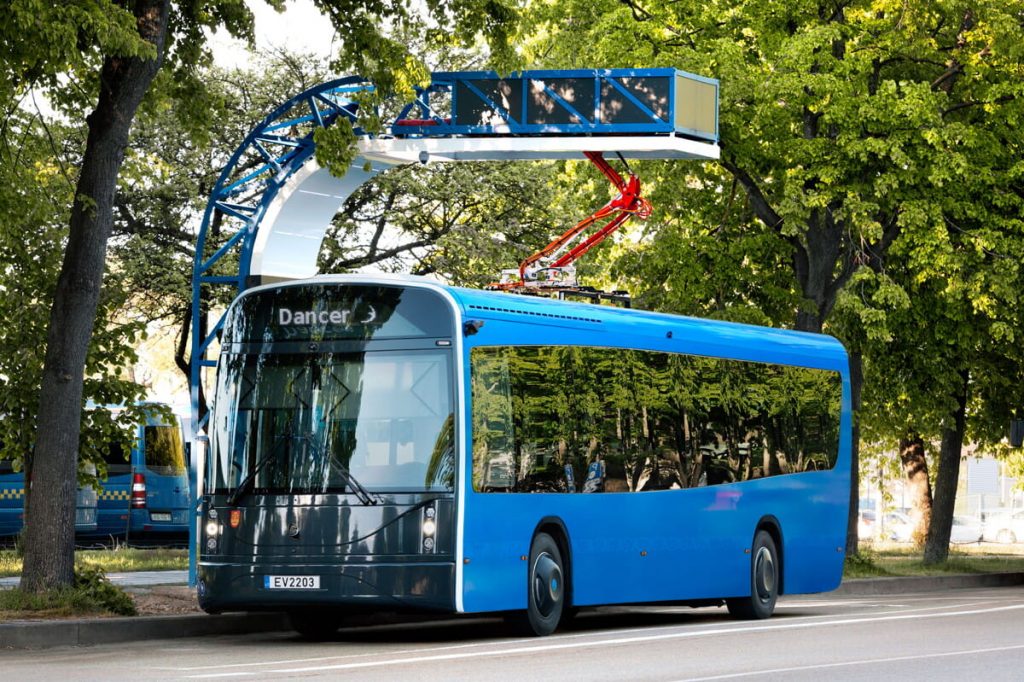 According to Vaidas Ramanauskas, General Director of JSC “Klaipėdos autobusų parkas”, “Dancer” buses are the first fully electric vehicles used for servicing public transport routes in Klaipėda, therefore the first year of operation allows to be sure of their reliability and technical parameters.

“First of all, compared to fossil fuel vehicles, the use of these buses is much more economically efficient. The average energy consumption of a “Dancer” bus is 0.72 kWh per kilometer driven. If fossil fuel buses were used for the same mileage what “Dancer” buses did during the past year, e.g. 120 thousand kilometers, they would consume almost 50 thousand liters of diesel fuel. Therefore, we calculate that it is not only a saving of financial costs but also 136 tons of CO2 saved and not emitted into the air of the port city, which allows to improve the air quality in the city,” says V. Ramanauskas.

“Having in mind the European Union’s ambitious strategic goal of the Green Deal to reduce air pollution from transport, electric or other high-tech buses are likely to replace all conventional fossil fuel-powered public transport vehicles over the next couple of decades. Therefore, we are pleased with the determination of Klaipeda city to implement innovations in the field of public transport and, by replacing diesel buses with non-polluting power plants, to ensure not only convenient transportation in the city, but also healthier living conditions, ”says Alvydas Naujėkas, CEO of “Vėjo projektai” group of companies.

Join the conversation and learn more about DANCER bus and DANCER Mobility.
We’re her to answer all of your questions
Get in touch